Following my fabulously food-y post Eating Out in Prague: Part One, (granted it was a while ago), there was obviously always going to be a second part and low and behold, this is it!

So jumping right back in to where I left off, on the Sunday evening for our anniversary dinner, we decided we wanted to have Mexican food, as per our first date. So, in the middle of the biggest thunderstorm I have seen in years and the torrential downpour that preceded the thunder claps, we ventured out for Mexican food. Our place of choice was Las Adelitas. Quesedillas are not on the menu, but are listed in the Google photos. Definitely ask for them! We did, and were honored with two HUGE plates, and enough food to take back to the hotel for a midnight snack. Twinned with an equally huge plate of nachos and a beer, the bucket of passion fruit margarita I ordered, did not go down amiss.

Choco Cafe was the most important port of call on Monday – after a lot of exploring a freezing city, on our very own, self guided, walking tour. This place gave us some of the best red velvet cake ever (literally) – the perfect kind, the right kind of chewy with frosting not too sweet. I opted for some mulled wine and my man picked a hot chocolate that was 39% cocoa and 100% melted chocolate in a cup, served with a spoon to eat it with.

I had seen a diner type place called James Dean that was supposed to be great so we headed there on Monday evening – but I would advise you to AVOID this place. The food menu is extremely bland and the cocktail choice mediocre at best. Boycotting this tourist trap, we did not have to walk far to find the Hard Rock Cafe! I know, still touristy, but we were in the mood for a good burger and it had been 3 years since my last burger at the Rock so in we went. The huge venue meant it appeared a lot less crowded, with soft rock music blasting out of every orifice of the three storey burger joint but the food did not disappoint. 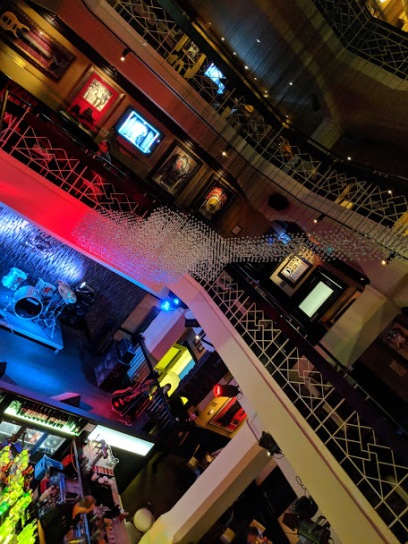 Crystal Bar – some of the best (and by that I mean the right balance between alcohol strength, Instagramableness and taste) drinks ever! The last time I had a drink that tasted so good was in a tiny bar in the mountains of a small town on the Turkish side of Cyprus, last summer, where they served my drink in a small bath tub instead of a glass, with pink ‘water’ and candy floss bubbles spilling out of the bath. Side note; Crystal Bar also does really delicious tomato soup with mozzarella – something which I always feel you just never see enough of here in the UK. My drink was the Crystal Lady and we returned here a couple of times, as I simply could not have just one of these.

Nobert’s Donuts was out penultimate stop off in Prauge – offering the ice cream man; strawberry icing, marshmallow, white chocolate and sprinkles and the Kit Kat Killa featuring chocolate, caramel icing, chocolate crispies, and a whole kit kat bar among other pieces of edible art. We eventually settled on Bueno Lemon; a donut laden with lemon icing, drizzled in chocolate sauce and a kinder bueno bar broken into pieces on top of it and a big cup of tea. And yes, I have thought about giving this place its own blog post because these pictures are just the start! 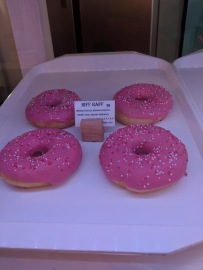 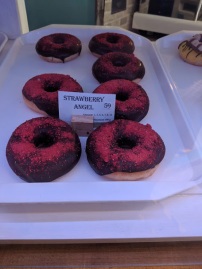 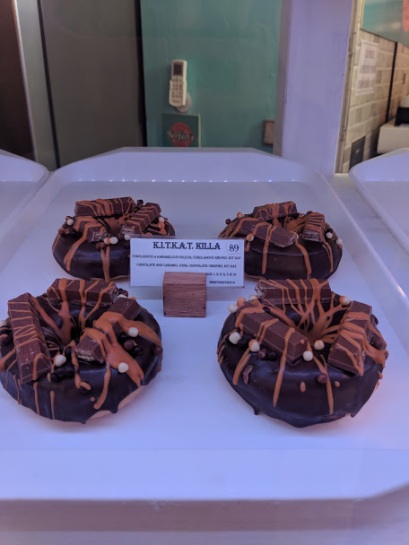 On our last night in the city, we went for another Italian, this time in the affluent Jewish quarter of the city, with me picking out a pizza that lacked tomato in every sense of the word. (Please do let me know how you feel about tomato-less pizza, not even in the sauce, as my boyfriend is definitely not a fan of this!)

I feel like I can’t wrap up this piece without giving an honourable mention to the food we had at the airport – not all of it, of course, but the Czech idea of mashed potatoes really does …well, see for yourself…

Eating out in Prague is generally super cheap. The tourist places have prices that match London for casual dining, but off of the beaten track in some of the places where the local people eat when they don’t want to each Czech food, are also really reasonable (disclaimer, I live in London, so my reasonable may not be your reasonable).

Like in a lot of countries, tipping in the Czech Republic is pretty much expected. Foreign visitors are frequently expected to tip at least 10% – an ideology that never appealed to me per say as I feel like gratuity should always be earned through good service and never expected. Also travelling on a budget, leaving a chunk of the money in the dish for strangers does not always go down well. Needless to say we did not tip anything extra than what was included in the bill (if it was) and never suffered. I think a lot of Prague is used to budget travellers passing through so customers are not made to feel bad for not tipping like they would in the USA or other parts of Europe.

Have you ever been to Prague? What did you think of the food there? Let me know in the comments below.

29 thoughts on “Eating Out in Prague: Part Two”