Visiting Poland in the dead of winter means only one thing. Aside from guaranteed snow, you will be looking for food to keep you warm. There were few traditional Polish foods that we liked the sound of (more on those later) and instead favoured Polish ‘style’ favourites, including one of the best pizzas I have ever had in my whole 25 years.

On our first night in the city, we trekked downtown in a sleety blizzard to Tutti Santi. This set us off on the right foot in the Polish capital, opting for a delicious spiced tomato soup and famous Polish bread, followed by one Quattro Formaggi Plus (four cheeses plus salami) and one San Sebastiano pizza. The latter consisted of traditional smoked meat, mozzarella, provolone picante cheese, onions, peperonciono and thyme. I also grabbed a glass of Polish red wine out of curiosity, which was absolutely huge and ended up costing about £2.30. With my Mr grabbing some Polish beer, the whole evening ended up costing only £25.

Exploring the Old Town on our only full day in the city, we needed to pick up some Trdelnik after missing out on it in Prague. Unfortunately for me, I was not a big fan and after a bite or two decided it was too sweet. (We picked up the chocolate and cinnamon classic). Instead, I picked up Rurka, a tube like wafer, filled with a fresh cream for about 70p. 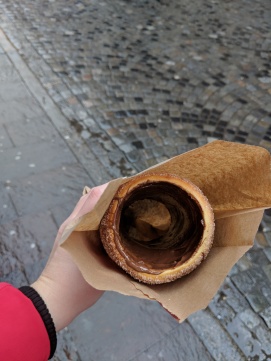 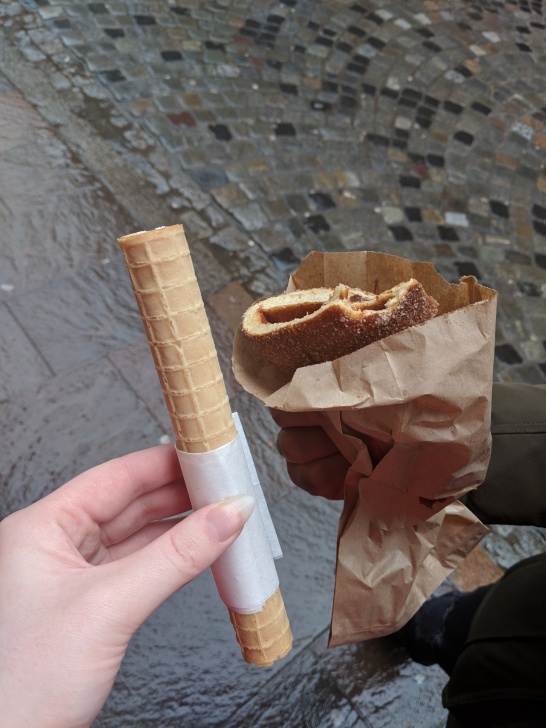 Usually not ones to eat at the tourist traps, with it being early December there was nobody anywhere and even the places in and around the Old Town Square where almost empty. That being said, we picked out a little cafe in the square to get out of the cold and have some tea. A fruity concoction with spices and a slightly bitter flavour, I am still not 100% what was in this tea, although it did make me feel very sleepy.

One of the best Polish snacks for me was Oscypek. A smokey and salty cheese made from sheep milk it was traditionally made in the Polish mountains although is widely available in supermarkets across the country nowadays, especially around Christmas. I particularly loved mine with a ‘winter berry’ jam and a glass of mulled wine.

With a lot more food crammed into Saturday evening and Sunday afternoon, I just had to keep something aside for a second blog post – YES, we actually ate that much food, even though we were only in Warsaw 48 hours!

Part two will be coming very soon, but before that, here are some honorable mentions to traditional Polish food that we just did not get to try.

Have you visited Poland before for any of these classics? Where did you visit and how did you find the food there?

27 thoughts on “Eating Out in Warsaw: Part One”