It is the story we are all familiar with. A young lion cub on the plains of Africa, heir to the whole savanna, who has a wicked uncle that will do anything to prevent his nephew from becoming king. I am of course referring to The Lion King – a Disney classic, animated feature film, world renowned smash hit, stage musical and now a live action blockbuster film set to dominate the screens in summer 2019.

Growing up in the early 1990’s I was never really a fan of anything much to do with Disney, mainly because it all seemed to revolve around princesses, which frankly I just didn’t have the time for (as a busy five year old!) The films from Disney that did get my attention (and love) were the animal focused, none princess-centric ones such as 101 Dalmatians, The Aristocats and ultimately, The Lion King.

If you are not familiar with the story, it follows lion cub Simba, his father Mufasa and his evil uncle Scar who wants to dethrone Mufasa and become king. Scar schemes to remove Mufasa from the picture luring Simba and Mufasa into a stampede of wildebeests. Simba escapes from the chaos but Mufasa is killed and Scar guilts little Simba into exile, where he grows up with the help of his new friends, sarcastic meerkat Timon and lovable warthog Pumbaa who encourage the lion to return to the plains after several years to claim the throne that is rightfully his.

Bursting onto the West End stage in 1999, this is single-handedly the most stunning musical there is to see. After 20 years at the Lyceum Theatre in London, The Lion King will redefine your expectations of a stage musical production and what is possible to pull off every night. Directed by Julie Taymor, the performers in the show physically become the animals, donning hollow puppet costumes and characteristically charging around the theatre, galloping down the aisles of the ground floor and sniffing the audiences. (This is why it is worth paying the astronomical ticket prices for a seat in the stalls).

It had long been on my list of musicals to see but I never wanted to pay so much for the tickets – some costing as much as £250.00. Ever eagle eyed for offers I managed to pick up four tickets including an aisle seat, around three quarters of the way back in the stalls for £80 each and man, was it worth every penny. From the moment you set foot inside the theatre you get the chance to go as crazy as you like with souvenirs and memorabilia from the show. I needed a lot of convincing that I did not need to purchase a toy Pumbaa or a Lion King beach towel…or Simba cup, or Pride Rock paperweight, magnet, keyring, notebook, several t-shirts and I think you get the idea. I did however pick up a lovely white jumper with a lion’s face on the front, which I am looking forward to wearing in the winter. 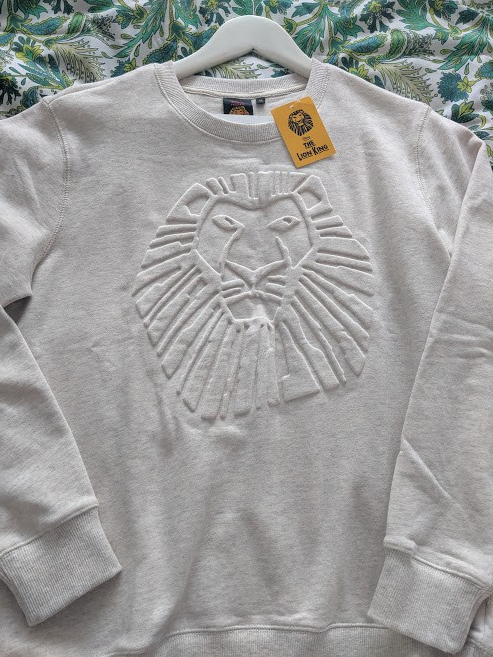 The show is nothing short of what can only be described as spectacular and without exaggeration, I actually found myself staring open-mouthed at one point in the performance. It is a fantastic show and definitely lives up to all of the hype and wonderful things you have heard people say about it. I genuinely have never come across anyone that has seen the show and found it ‘meh’.

Creatures including elephants and rhinos meander down the double aisles in the stall seating as a burnt saffron sun on stage illuminates the theatre it its entirety. African percussion sounds fill the auditorium as stilt masters parade the giraffes into the party, accompanied by performers steering bicycle like devices from which antelopes appear to prance through the African grasslands ever so gracefully. I really liked how the presence of birds flapping was emulated by bendy pole baring cast members whipping their giant sticks around in fast circles to make the feathered friend on the end of the pole fly around in circles ever so delicately. Pride Rock appears before audiences, corkscrewing its way up and out of the stage. The scene is remarkable. You can feel the awe in onlookers hearts and minds.

Since its debut in July 1997 at a theatre in Minneapolis, Minnesota, the show has been a smash hit from day one, opening on Broadway later that year in New York. It has become the third longest-running show in history, behind only Phantom of the Opera and Chicago. Making literally billions of dollars over the years, it is easily the highest grossing Broadway production of all time! Placed in wider context, it has grossed more than the combined global revenue of the six most popular Harry Potter films.

100’s of millions of people have seen the musical across the world and it is still running in London after almost 8,000 performances. If you have not seen The Lion King on the West End stage yet, I would recommend that it gets put on the top of your to see list.

Have you seen The Lion King musical on stage before? What did you think of it and will you be seeing the new movie?

27 thoughts on “The Lion King on the West End Stage”