It’s a rags to slightly better rags sort of story. Waitress is about a young woman and professional pie maker called Jenna. Ironically also, you’ve guess it, a waitress, her relationship with her husband Earl is somewhat abusive and she ends up pregnant and looking for a way out of her marriage. Before the pity party for poor, pregnant Jenna can begin though, she starts up an affair with her gynecologist, Dr Jim. With the heat of a tealight candle flickering on a rainy November night, this relationship is used as Jenna’s ‘wake up call’. With the affair over before it really begins, Jenna looks to a local county pie making contest with a big money prize as her only way out of her marriage once her baby arrives.

I found myself annoyed a lot of the time by the character of Jenna, which as the female protagonist in the show, I am guessing was not the intention of the creators. The relationship between Jenna and her female colleagues is the literal definition of what comes to mind when women say friendships with other women are ‘full of drama’. I had no patience for her or her pals. For me, the show tried too hard to be funny, which I think always comes across a little painful on a stage. I was obviously in the minority however, as the audience around me seemed to love the show. 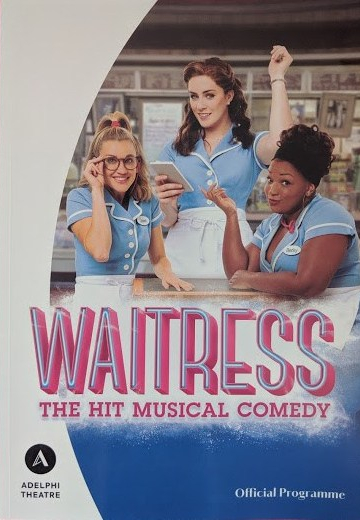 Fun loving and intended to be funny, I was disappointed with this show to say the least. I had been quite excited to see the show and was annoyed at myself for not catching Katherine McPhee in it when it opened earlier in the year, therefore I was super determined to catch Lucie Jones and Ashley Roberts in the show. To comparatively put it in pie terms, I found my slice a bit stale and undercooked. The musical has all of the ingredients to make the finest lemon meringue pie but comes out of the oven soggy in the middle and burnt around the edges.

The music and lyrics by Sara Bareilles, sadly for me, there are no take away tracks from this musical. You know the one – when you come away from a musical production and have that one song in your head for at least the evening, if not into the following week. A Whole New World in Aladdin, a number or two from The Lion King, All That Jazz in Chicago or anything from Phantom… The list could go on and on. Regrettably the most memorable ear worm from this show is the ‘sugar-flour-butter’ murmurings throughout, which illustrate each moment the main character seems to have a bright idea or a deep thought, which adds to the remarkable tweeness of the production.

I was left feeling a bit disgruntled after the show and largely let down. I honestly don’t think that the cast were bad at all and the vocals were okay at best for a West End show, but the story line and music just did not work for my personal preferences. I am glad that I went to see it and added the program to my collection, but it is not something I would be rushing back to see.

Have you seen Waitress on the stage, or even the movie? Have you ever been really disappointed by a show you were excited to see?

31 thoughts on “Waitress on the West End Stage”